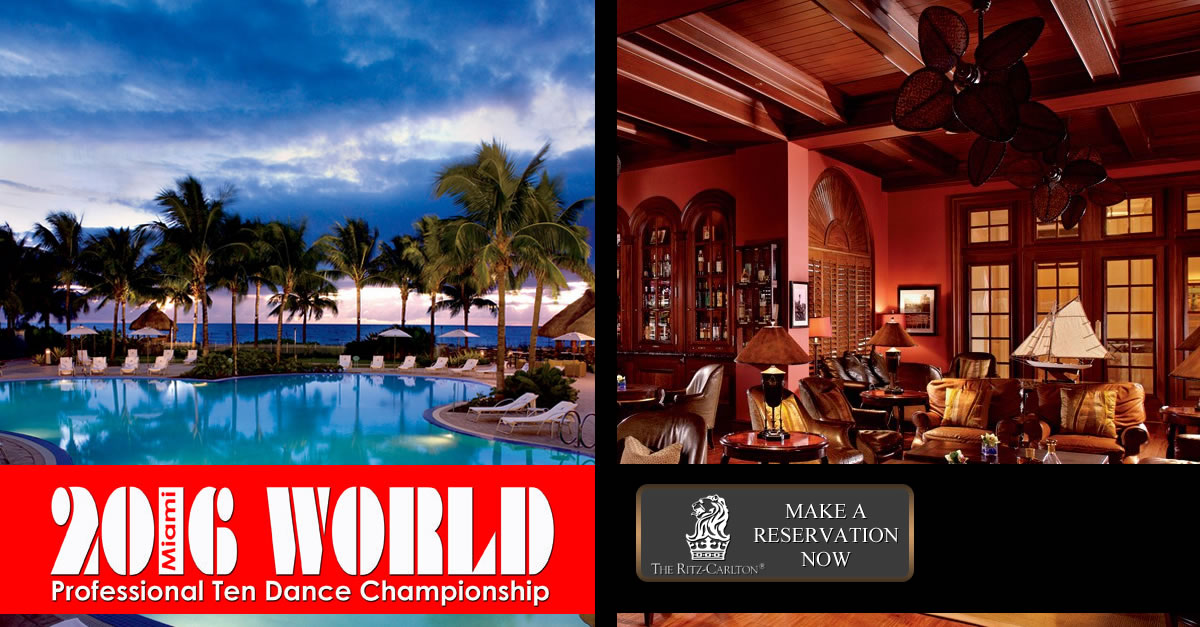 When it comes to ballroom dancing nothing beats the professional Ten Dance Championship, which is celebrating its 46th year, in 2016. For more information and reservations please visit grandnationalchampionship.com

The 2016 event has over 500 experienced and and amateur dancers, coming from all over the world to compete. This should be South Florida's most social affair! Even though many people are coming to watch the elegant dancing techniques of the participants, the Grand National Championships will be overflowing with even more exceptional entertainment.

From all over the world there will be vendors such as "Dance America", "Anabell’s Dancewear", "Designs to Shine by Maria McGill" and many others presenting their newest, top of the line dance shoe collections, the most glamorous women's dance attire and men's dancewear. If you need new pair of women's dance shoes or men's Latin dance shoes - bring your wallet and enjoy yourself.

From around the world there will be the top rated experienced couples that will be competing for the most inspiring, respected, as well as admired position as they compete against other couples for the high status title for the world champion. This year the tournament will have the 2016 World Professional Ten Dance Ballroom Championship as well as its 46th year ritual of gathering together experienced as well as amateur dancers to challenge enthusiastically along side each other in order to achieve the title of Grand National Champion.

The dance tournament is arranged by Cassandra and Peter Schneider, certified as well as accepted under auspices of the National Dance Council of American known as NDCA as well as the World Dance Council also known as WDC. In partnership with the 46th Grand National Dance sport Championship, this is also one of the longest enduring Dance Sport Championship in the United States of America. Cassandra and Peter Schneider have been privileged to host these exceptional dancers from all around the world 2 years in a row. In extension to the World Professional Championships there are a massive amount of open and closed championships in all separations from experienced, amateur, pro-am, senior as well as junior. Starting on Thursday October 20th as well as on Saturday evening October 22nd 2016, this  will be appearing in the crowning of the Professional World Champions. The United States of America, Scotland, Italy, England, Germany, Austria, Norway, Russia, and Canada are phenomenal panel of arbitrator that will be present at the dance tournament as well as more than 20 countries that will be represented. Of the most physically challenging dancesport affair in the world many of them have been World Dance Champions, they will resolve the championship winner.

There are ten different dance competitions taking place during the Dance Championship. Five international standard dances will also be seen during the competition. These dances include the ever famous Waltz, the Tango, the Viennese Waltz, Foxtrot, and the fabulous Quickstep. Some beautiful Latin dances will also be on display during the championship. These beautiful dances include the Cha-Cha, the Samba, the Rumba, the Paso Doble, and the Jive. The couples in the competition must master all of the dance variations. The dancers will be judged on quality as well as their artistry of the specific dance that they are performing. This competition will be one of the most difficult dance competitions and is one of the largest dance competitions around the world. Competitors from all corners of the globe will be at this event to show off their grace and talent.