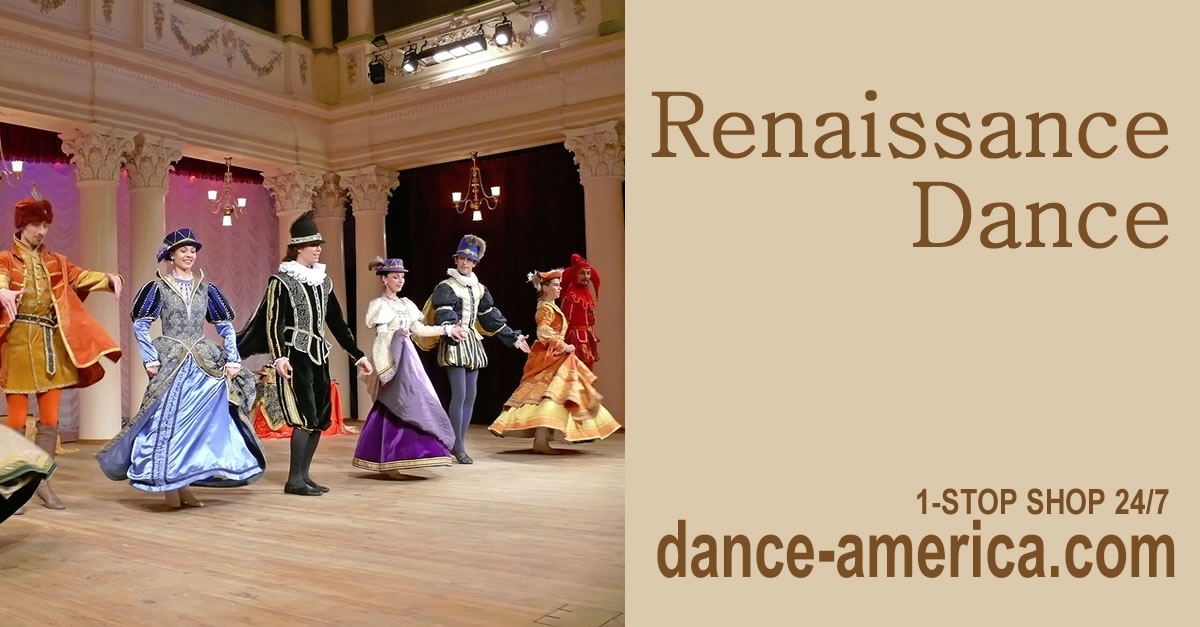 The Renaissance era marks the beginning of documented dance techniques. Before the Renaissance, dance was only mentioned offhandedly, not closely recorded. The rise of more complex and stately dances for royal gatherings led to more official documentation, eventually allowing us to have a pretty clear idea of how they danced during the 1500 and 1600s. Dance masters recorded the names of the dances, how to do them, and the music that went with them. These dancing treatises also included information about fashion, such as what to do with swords or fans while dancing.

The fashions of the time had a strong impact on the types of dances that were performed. Unlike modern dancewear that is made to fit the dance, Renaissance dances were designed to fit the current fashions. This was the era of tight laces for men and even tighter corsets for women. The men wore thick bulky collars and the women wore large headdresses. Shoes during this era were still made without a distinct left and right shoe, making the dancers’ shoes and boots somewhat awkward, but not quite as awkward as the bulky dresses that were in style. These fashions hindered movement in the head and neck, and sometimes the arms, which could explain why many Renaissance dances focus solely on footwork.

This time period also saw a distinct divide in dance styles, the separation of court dances and country dances. Prior to the Renaissance era, most records of dancing imply that the upper and lower classes enjoyed the same types of dances. This new complex form of dancing, which required instruction manuals and dance masters, set the classes apart. The upper classes took part in complicated, choreographed dances, which would be more like performances. These dances were designed to be watched and enjoyed from all the different viewpoints in the ballroom. Dances like the Balli, Bassedense, and Ballo would have been danced at every fashionable Renaissance ball.

There is not much documentation of the exact dances that country people were taking part in during this time. What information has been found, suggests that they continued to enjoy the circle and line dances that were common in Medieval dancing. Some records show that these dances were still being used in the upper classes too. Since the more complicated dances required so much preparation and practice, they were not meant for everyone. When the time came for everyone at the ball to tie on their dance shoes and hit the dance floor, they would dance the country dances instead. This just goes to show that even in the Renaissance era, everyone wanted to dance.