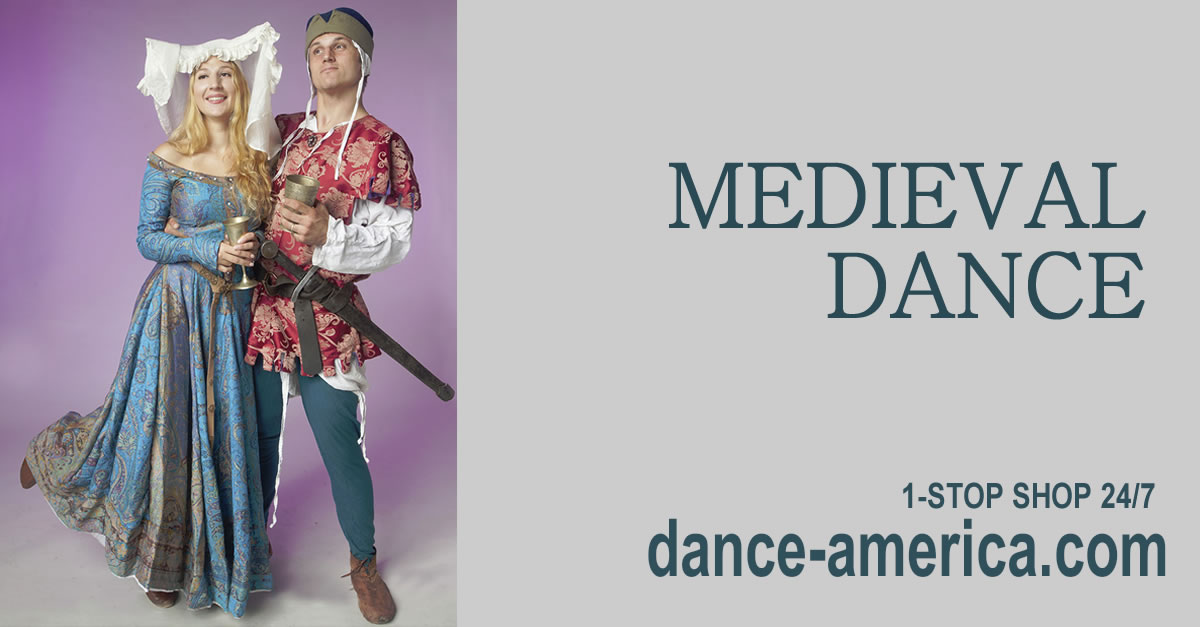 Medieval dancing dates back to the 12th and 13th centuries. Unfortunately, because that was so long ago and record-keeping was difficult then, very little information about the dances of that era still exist. The dances that we do have a record of were very simplistic circle or line dances. There are some records that mention dancing, but few have details about what the dances were actually like, let alone step diagrams. One thing we do know is that Medieval people, both rich and poor, definitely liked to dance. From what we can gather from these old texts and some paintings, there were many similarities between the dances performed by the upper classes and those favored by the country peoples of the time.

One thing that we know for sure is that the dancewear would have been very different between the classes. The wealthy men and women would have worn vibrant, rich colors with many accessories and ornaments. The women wore tight corsets and heavy skirts as well as large headdresses. The men wore brightly colored tunics with emblems on them, probably family crests and images related to status. Both men and women would have worn fitted leather shoes or boots. These were usually flat shoes with little embellishment.

The country people or peasants would have worn rough homespun fabrics with few colors or decorations. For shoes, they would have worn whatever they had access to, usually made from leather if they could get it, but not as fine or protective as those of the upper classes. This did not stop them from dancing the Carole, the most well-documented Medieval dance, which was simple enough to perform no matter what type of shoes you had.

The Carole is a circle dance where the dancers gather in a circle, sometimes around an object or tree, and join hands. They would move toward the left, stepping first with the left foot, then the right. They would also provide their own music by taking turns singing or humming. Although this does not give us a lot to go on, it seems that this is one of the oldest recorded dances in history. A few other Medieval dances include the egg dance, quadrille, the Morris dance, and the jig.

Oddly enough, the most information we have about these dances come from religious documents condoning it. Initially, the Christian church of the time was completely against dancing, saying that it was a vulgar practice that led people to sin. Luckily, these religious authors chose to record how a few of the dances were performed, giving us a look at how dance was performed almost over 800 years ago. Eventually, the religious leaders of the time came around and admitted that perhaps not all dancing was bad.