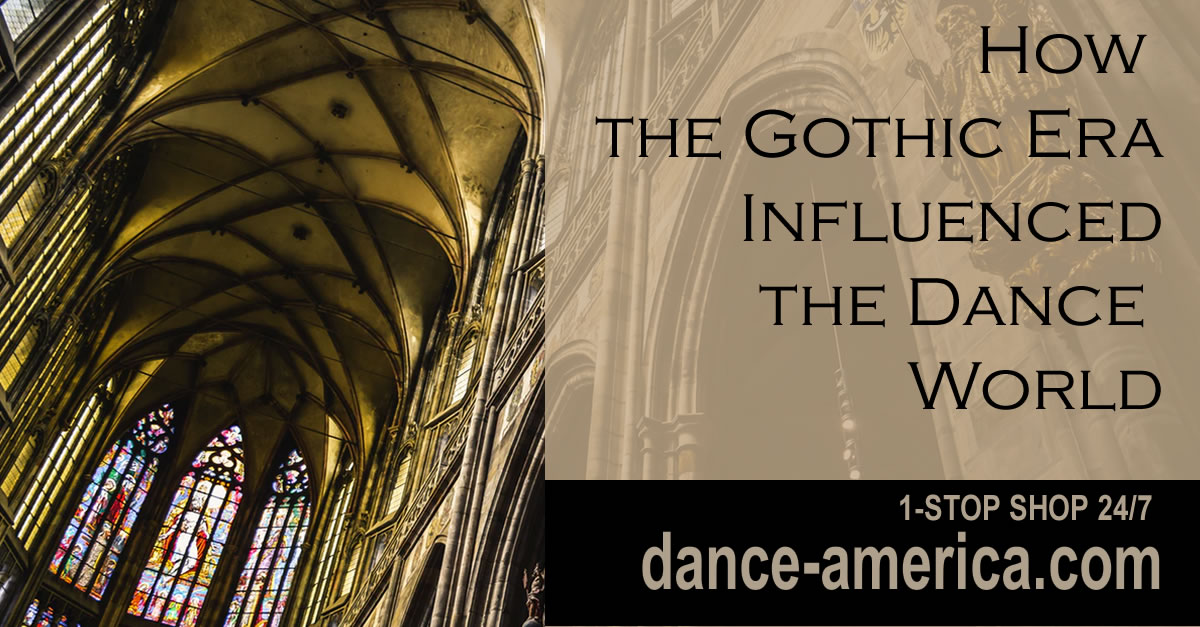 How the Gothic Era Influenced the Dance World

When people think of gothic nowadays they often think of teenagers wearing thick makeup, dark clothes, and heavy black shoes, often boots of some kind. Although this is the modern definition of goth, the gothic style has a much longer history, starting all the way back in the mid-12th century. The Gothic era lasted until the 16th century, which is actually when it was first called Gothic. This era is primarily known for its architecture, think huge looming buildings with frightening sculptures, high arches, and flying buttresses. These structures were large and intimidating and came to be negatively referred to as Gothic, which at the time meant barbaric, and the name stuck. Architecture was not the only art form that flourished during this time, painting, sculpture, illuminated manuscripts, and stained glass all experienced prominent growth. Although there is not much documentation concerning dance in the early Gothic era, there is some from the later periods.

The Gothic era overlaps the Renaissance age, which is when the first treatises on dance were published. This comes as no surprise because much of the art from this era is marked by its growth out of somewhat vague and undefined structures, into fully developed art forms. A publication from this time, Orchesographier by Thoinot Arbeau, provides substantial information about the style of dance during the late Gothic era. Orchesographier provides a detailed look into how dance had evolved from the country dances of the Medieval era to the courtly dances of the High Renaissance.

Another advancement in the art world that aided in the preservation of Gothic dance styles was the expansion of painting as an art form. Up until this point in history, painting was used to document special events and to depict religious scenes. The rise of new painting techniques and opportunities led to an increase in secular paintings. Artists began documenting more of life, including dancing. This provides us with a first-hand look into the dancewear and shoes of the time. Of course this was long before clothing was designed specifically for dancing, but it helps one to better imagine what it would be like to dance in the shoes of a Renaissance courtier.

The Gothic era attributed to dance through the documentation and preservation of the art form. Dancing has been a favorite pastime all around the world for thousands of years. Unfortunately, much of that history has been lost due to a lack of records. Thanks to the rise of art and art appreciation during the Renaissance and Gothic era, dance became an important part of history that was to be preserved and passed on to future generations