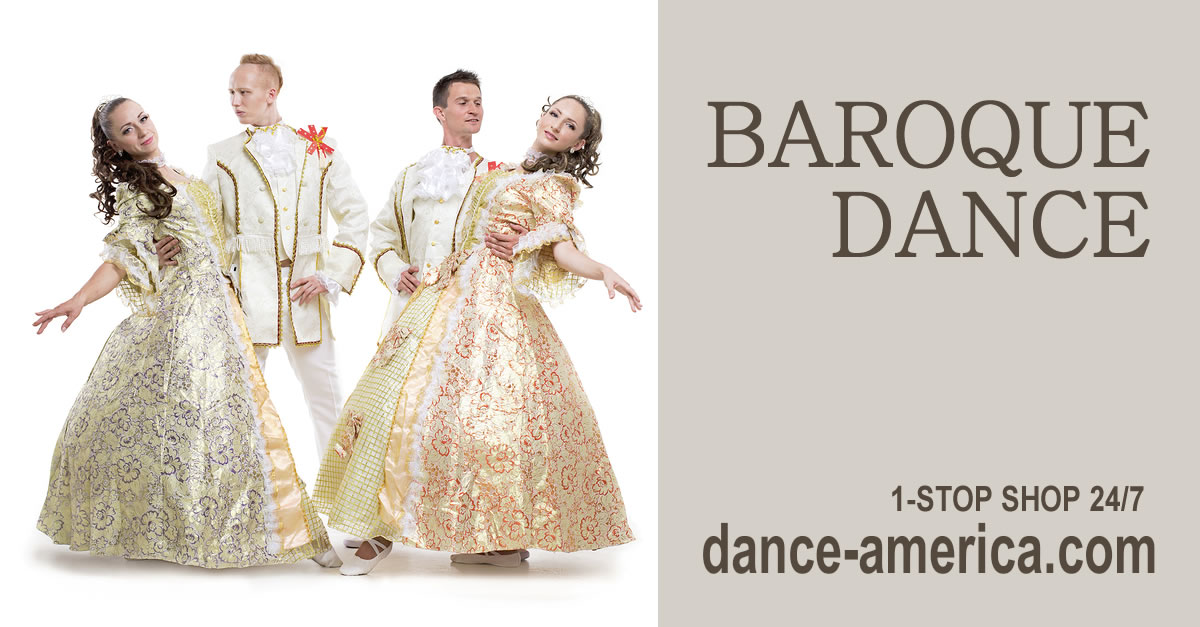 Baroque is a very old style of dance, dating back to the time of Louis XIV of France, so from the late 17th century to the early 18th century. King Louis XIV was an avid dancer, even when he was as young as fourteen he was developing his own dances and teaching them to members of his court. As you can imagine, these were aristocratic dances, danced at the finest parties. This was a time when tight corsets, huge billowing skirts, and elaborate high heeled shoes were in fashion. Men of fashion commonly wore high-heeled shoes as well, with large buckles or bows. Just as the fancy shoes and dresses were not just clothing, the dances were not just dances. They were a sign of status. Society would frown upon anyone who did not know the latest steps. Worse yet, the king would frown upon them and no one wanted that.

The fame of these dances is the reason we have such accurate records of them. Keeping up to date on the newest steps was so important to the French upper classes that dance masters would publish pamphlets about them, no small feat in the early 1700s. These pamphlets would explain the dance and show a convenient diagram of the steps. This ensured that everyone would be on the same page and be able to perform the dances if the king requested.

Baroque dance is considered somewhat of a precursor to modern ballet and it is easy to see why. These dances use turnout and a vertical carriage of the body as well as soft steps, elegant arms, small jumps, and a lot of bending. This style of dance it very graceful and courtly, exactly what you would imagine at the court of Louis XIV. Another element that connects Baroque to ballet is the style of music to which these dances would be set. These dances were invented when harpsichords and viols were the instruments of choice, so think classical music. Many pieces of music from that time such as the minuet, passacaille, gigue, and gavotte, were named for the dances that went to them, or vice versa. Other dances in this style include: chaconne, forlana, and the rigaudon.

Thankfully, since so much history and information about these dances was recorded and preserved, you can still learn them. Learn to dance exactly the way they did in the French court hundreds of years ago. Do not worry, you will not have to wear hightop, large-buckled, high-heel shoes so learn. Modern, comfortable dancewear with soft-soled shoes will work just fine.